As a child, I remember my parents requiring head protection anytime I desired to ride around our neighborhood and even as a small child, I remember being embarrassed by the dreadfully unfashionable look of typical helmets. Really, it is nearly impossible to not feel like a complete dork when riding around in a traditional helmet. And then, in high school, I went through a big rollerblading phase. I spent hours playing and thinking about playing street hockey, which is an incredibly cool and fun sport, and, being the ridiculously competitive person that I am, often a bit dangerous. Not only was it difficult to not be dorky on a regular basis while making it through the horrendous puberty years of high school, but add in trying to play such a cool sport as hockey while wearing a hideous and obstructive helmet. And, typically, I was the only girl on our street who played. (Somewhere I missed the memo as a teen that I was supposed to get into clothes and makeup and talking about boys like the other girls in my neighborhood. I instead was the athletic and rarely feminine girl on our block.) Luckily, my mother took pity on me at some point and stopped nagging me to wear head protection as long as I kept the knee pads and often wrist pads (which I started wearing on my own anyway, since I was tired of slamming the pavement and nearly killing my wrists). Thankfully, I think my mom understood my need for limiting dorkiness as much as possible. Not to mention the nasty, sweaty helmet hair that always resulted.

But now, they finally come out with something that at least attempts to mask the ugliness of helmets. 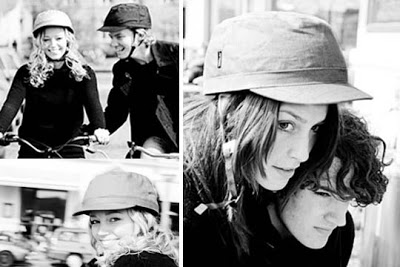 It’s about time. I’m sure they are probably still a bit clunky, but at least they have a tendency towards fashion instead of ignoring it completely. I would wear one, too bad my bike got stolen back in Arkansas. Mark’s did too. But maybe someday, when we can afford to repurchase some bikes, we will add these helmets to our cart. Thanks to AT (one of my favorite design blogs) for bringing these to my attention.

I’ve always wished I was a superhero of some sorts with a flashy and unfashionable costume. Instead I’m a wife, mom and children’s book illustrator. Here I post about illustration and other random things I love. I’m obsessed with picture books, owning over 700 and I’m passionately blogging about them at threebooksanight.com.